Tumor-specific immunity occurs in cancer patients but has insufficient potential to control or eliminate the tumor. Strengthening this response through immunotherapy may lead to a durable, systemic response that may also control (development of) metastases. However, many hurdles preclude the induction of protective anti-tumor immunity, including clonal deletion of high-affinity, self-reactive T cells, insufficient innate immune signals in the context of cancer and the hostility of the tumor-environment towards protective immunity resulting in compromised T cell function.

A considerable proportion of tumor tissue consists of recruited and resident cells – often referred to as tumor microenvironment (TME) or stroma – and in fact, tumor progression and response to standard as well as immune therapies are strongly influenced by the TME. On the one hand, T cells can prevent tumor outgrowth, and a high density of activated CD8+ T cells in the TME is associated with better prognosis and therapy response. Such tumors are often referred to as hot tumors. On the other hand, the TME negatively influences the function of T cells by various mechanisms including immune checkpoints and immunosuppressive cell types as well as cytokines.

The main goal of our laboratory is to better understand the mutual interaction between the immune system and cancer and how this interaction changes after therapeutic interventions. We think that this knowledge enables a better engagement of the immune system during standard or immune therapies, which will increase the clinical efficacy as well as the durability of such therapies.

1. The immune modulating influence of radiotherapy

Radiotherapy is a standard treatment for cancer and can promote tumor-specific immunity. Although around 40% of all cancer patients will receive radiotherapy at some point, our current knowledge about how radiotherapy influences protective immunity and metastasis in the context of cancer is insufficient.

Identifying conditions that promote local as well as systemic anti-cancer immunity most likely will improve the efficacy of radiotherapy as well as the sustainability of the clinical response. Importantly, such optimized conditions will allow a more efficient combination with immune checkpoint inhibitors. Therefore, the first aim is gaining an in-depth understanding of the clinical and immunological response to different, clinically relevant regimens of radiotherapy.

Sensing of cytoplasmic DNA by cGAS results in production of the dinucleotide cGAMP and consecutive activation of STING followed by production of type I interferon (IFN). Although cancer cells contain supra-normal concentrations of cytoplasmic DNA, they rarely produce type I IFN spontaneously. This suggests that defects in the DNA-sensing pathway may serve as immune escape mechanism. The second aim will address innate immune activation by radiotherapy with a focus on defective innate sensing as immune escape mechanism. 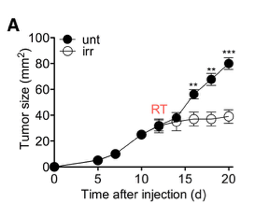 Tertiary lymphoid organs (TLOs) can arise in any tissue as response to chronic inflammation. TLOs are organized structures that closely resemble the follicles of lymph nodes with respect to cellular composition and function. In autoimmunity and infectious diseases, TLOs support immunity and contribute to disease severity and pathogen clearance, respectively. In human cancer, the presence of TLOs correlates with improved survival, suggesting that TLOs support anti-tumor immunity.

Our understanding of the mechanisms underlying the development of cancer-associated TLOs as well as their relevance for tumor control and patient survival is limited.

This project aims to address these questions in a genuine translational fashion. We will use preclinical mouse models and human samples in an iterative process to address following aims. Aim 1: Identify which cell types and factors enable or prevent cancer-related lymphoid neogenesis. Aim 2:  Investigate whether and how cancer-associated TLOs support protective cancer-specific immunity. 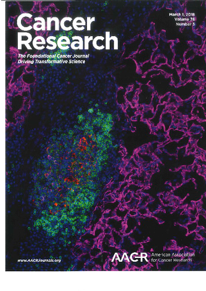 3. The influence of conventional and tissue-resident NK and NKT cells on liver metastasis

Natural killer (NK) cells are important immune effector cells, which bridge innate and acquired immunity in controlling tumors and viruses. Most of our current knowledge of NK cells is derived from studies of mouse splenic and human peripheral blood NK cells, referred to as conventional NK cells. Recently, a population of tissue-resident NK cells was described in the human and mouse liver. In the liver, tissue-resident NK cells differ from conventional NK cells in terms of surface marker expression, cytokine profiles and cytotoxic potential. We use different genetically modified mouse strains that lack the conventional or tissue-resident NK cells to study the individual contribution of each subset to defense against cancer cells that disseminated to the liver.

NK cells in the liver (courtesy of G. Lucchiari and L. Ducimetière)

4. The influence of the immune system on metastatic dormancy

Metastasis is a common cause of breast cancer-related mortality. In a proportion of patients, metastases become clinically apparent long after resection of the primary tumor. This phenomenon is referred to as metastatic dormancy. Because 60% of breast cancer-related deaths occur >5 years after resection of the primary tumor, understanding dormancy is clinically relevant.

Link to a presentation: